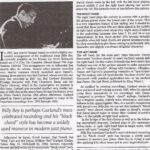 In 1957, jazz pianist Ahmad Jamal recorded a highly successful arrangement of the traditional song Billy Boy, currently available on the Mosaic (or Verve Reissues) 9 CDs boxed set The Complete Ahmad Jamal Trio Argo Sessions 1956-62. This arrangement was so influential that shortly after various other pianists recorded very similar versions clearly modelled upon Jamal’s. Among these pianists was Red Garland, whose own trio version was recorded in 1957 (on Red Garland Revisited!, Prestige Records) with Paul Chambers (bass) and Art Taylor (drums) and has been transcribed by myself in the Spring 2011 issue of Sheet Music Magazine (USA). Garland also recorded another very similar version of Billy Boy as the piano/bass/drums trio feature piece in Miles Davis’s famous 1958 album Milestones—as it is known, from 1955 till January 1959 Garland played in Davis’s groups and participated in many of his important recordings of that period. END_OF_DOCUMENT_TOKEN_TO_BE_REPLACED